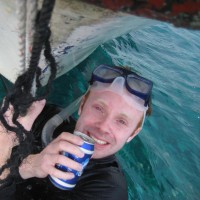 This tutorial will take you through the steps of setting up an EC2 instance running OpenVPN server. It will then cover how to grant and revoke access to your VPN server.

AWS has an awesome firewall built into its core services, which can easily be used to make sure that only certain ports are open to the outside world. One extra step that we can take is to run a VPN server that serves as the gateway to our protected AWS resource, e.g. EC2, RDS, etc… We can then shutdown direct access to our AWS resources just by revoking access via our VPN server. This is very useful if you need to revoke access for a former employee.

AWS now offers a managed VPN Service, but this service costs at least $72 a month and is even more expensive when your VPN serves a lot of traffic. A lot of smaller organizations don’t need all the features of the managed service and instead can run their own VPN server for just the cost of an EC2 instance. You can even use the free tier so that you don’t have to pay anything for the EC2 instance for the 1st year.

Log in at https://aws.amazon.com, type EC2 in the search box, and click on the target to go to the EC2 Dashboard.

Note: if the IP addresses that your team uses are static then you can add yet another layer of security by specifying an IP address range in the Source of your rules. However, you’ll want to leave the Source open to anywhere if you want your team to be able to connect from any IP as they may be working from a hotel, home, cafe, etc…

Return to the EC2 Dashboard and then click Launch instances:

Select Ubuntu (you can of course select almost any other OS that runs OpenVPN, but this tutorial is tailored to Ubuntu)

From the list of instances, select the VPN instance and then Actions -> Networking -> Change source/destination check from the drop down menu.

Select Stop and click Save. This is needed as otherwise, your VPN server will not be able to connect to your other AWS resources.

Overview: when an EC2 instance is stopped and restarted, the Public IP address changes. We want the IP address of our VPN server to remain static so we’ll use an Elastic IP Address.

Make a note of your new Elastic IP address as this will be the Public IP Address of your VPN server. We will refer to this address later as PUBLIC-IP-OF-VPN-SERVER.

Then, select the Elastic IP and click Associate address from the drop down menu.

Select the EC2 instance you created above and click Associate:

SSH into your VPN server:

Download our helper scripts and set up a default config:

Edit config.sh and enter in your configuration. Note: PUBLIC_IP should be equal to the Elastic IP Address that you created above.

You’ll now update Ubuntu. Note: you will be prompted several times and when you do, just press the Enter key.

Now, install OpenVPN. Note: you will be prompted several times and when you do, just press the Enter key.

At this point, the OpenVPN server is running.

Routes must be added to the server so that your team’s clients know which traffic to route to the VPN server.

You can determine the proper subnet by returning to your list of EC2 instances, clicking on a target instance and identifying the Private IP.

On the VPN server edit /etc/openvpn/server/server.conf and add something like the following:

Then, restart the VPN server with:

Note: We assume that you are still SSH’d into the VPN and logged in as root.

Run the following command and be sure to replace client below with a unique name for your user/client.

You’ll then find a configuration file at

You will want to provide this file to the individual on your team who will be connecting to your VPN. SCP is handy for downloading this .ovpn file from your VPN server.

Your team can use one of various VPN clients such as Tunnelblick (OS X) and OpenVPN (Linux, iOS, Android and Windows). After installing one of these clients, they should be able to set up the VPN config just by double clicking on the .ovpn file.

Note: once connected to the VPN, your users will want to use the Private IPs of your AWS resources. You may want to use nslookup to lookup the IP address from the AWS custom domain names provided by AWS. You’ll probably want to use Route 53 to create subdomain records that route to the Private IPs.

Note: We assume that you are still SSH’d into the VPN and logged in as root.

Run the following command and be sure to replace client below with a unique name for your user/client.

If your VPN client reports a TLS handshake failed error then this is most likely because your VPN security group (Step 1) is incorrect. Make sure that you have the correct ports and protocols specified — a common problem is not specifying UDP for port 1194.